How does barley work in a pond? 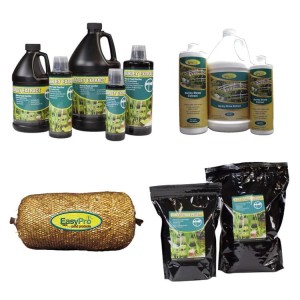 Barley Extract does not kill existing algae. Because of this action, it is sometimes called an algistat as opposed to an algicide. It is not understood how barley straw prevents the growth of algae. It is believed that the decaying straw releases chemicals that inhibit the growth of algae.

What does Barley do for a pond?

The exact mechanism is poorly understood, but it seems that barley straw, when exposed to sunlight and in the presence of oxygen, produces a chemical that inhibits algae growth. Barley straw does not reduce the growth of other aquatic plants.

Algae cause a number of problems in water. They impede flow in drainage systems, block pumps and sluices, interfere with navigation, fishing and other forms of recreation, cause taint and odour problems in potable waters, block filters and, in some instances, create a health hazard to humans, livestock and wildlife. These problems seem to be increasing, probably because nutrient levels in water are rising as a result of human activity and natural processes. At the same time there is a growing worldwide demand for improvement in water quality. Thus, the need to control algae is increasing for environmental, recreational and public health reasons.

Because of their small size and rapid growth rates, algae are difficult to control by methods used for other aquatic plants. Cutting and other forms of mechanical control can help to reduce problems with filamentous algae but are of very limited use. Many algae are susceptible to appropriate herbicides but this approach is unpopular in some waters on environmental and public health grounds. Furthermore, herbicides which control algae also kill higher plants so that, although the water is cleared temporarily of all plants, once the herbicide has gone from the water, the regrowth of algae is not restricted by competition from the higher plants and the problem can get worse in subsequent years.

A new method of controlling algae has been developed by the Center for Aquatic Plant Management which overcomes many of these problems. This involves the application of barley straw to water and has been tested in a wide range of situations and in many countries throughout the world and has proved to be very successful in most situations with no known undesirable side-effects. It offers a cheap and environmentally acceptable way of controlling algae in water bodies ranging from garden ponds to large reservoirs, streams, rivers and lakes.

Despite the simplicity of the idea, experience has shown that there are a number of basic rules which must be followed to ensure that the straw works successfully. The purpose of this leaflet is to provide practical advice on the optimum ways of using straw.