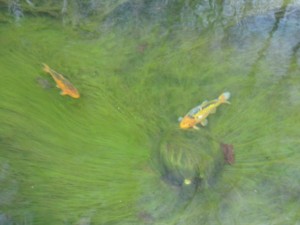 One of the most recent devices to enter the pond care market is something called a pond ionizer and it promises to be a relatively affordable and safe system for helping to control algae in small ponds, water gardens, and pondless waterfalls.

Ionizers are best known in the air purification market and many “air ionizers” have been sold over the years. In simple terms ionizers use electrical power and current to ionize air particles. They add a positive or negative charge to these particles which is purported to purify the air.

A pond ionizer however uses a similar electrical charge which runs through what’s called an anode. The anode is made out of copper and is placed in the water flow line. By controlling the amount of electrical current going through the anode, the release of copper ions can be controlled within in the pond water itself.

Now you may ask, why is this important?

Copper Is Toxic To Algae

Primarily the main power behind copper, in terms of in pond use, is that copper is toxic to many algae types (including string algae and green water) and it can be used to control and kill many algae blooms. This is why copper has been traditionally been one of the main ingredients of algaecide chemicals.

One problem with copper algaecides however, and in this discussion we’re talking about small pond treatments, is that small bodies of water are completely enclose or confined ecosystems. With such small volumes of water, there is not as much room, or buffering for mistakes in dosage, or other changes that can happen when algae is treated with a chemical.

Algaecides can and often are used in koi ponds and many times there are no problems however other people have experienced complete fish loss when products like this are misapplied or conditions are not supportive of the fish during the treatment. Because of these experiences many pond owners have begun to shy away from copper algaecides in smaller ponds and other algae control alternatives are always being considered.

Why A Pond Ionizer May Help

One of the interesting and potentially beneficial features of many pond ionizers is that they have some type of gauge or dial in which the amount of current going to the anode can be controlled. As the current charge rises, more copper can be released and as the current is lowered less copper is added to the water. As yet, these are not self adjusting systems, but they can easily be managed by the push of a button or turning of a dial.

Ideally the pond owner would want to use just enough power/copper to maintain a clear, algae-free pond. This allows the use of the lowest amount of copper in the water, and it allows a longer life of the anode. Most anodes under normal conditions will last a year or longer and then it will need to be replaced to ensure consistent operation.

The water should be tested frequently for copper concentrations (using test strips) and after awhile one can generally get a feel for where the device needs to be set to maintain clear water.